Japanese Style in the interior of 2020

Every year, interest in oriental culture in European countries is increasing. Tea ceremony, sushi, Japanese dishes the fashion for them is only growing, which is not surprising. After all, everything that surrounds the land of the rising sun is surrounded by mystery, ancient philosophy, and equally ancient traditions. The Japanese style in the design of apartments is no exception, the simplicity, and functionality of which is difficult to underestimate. 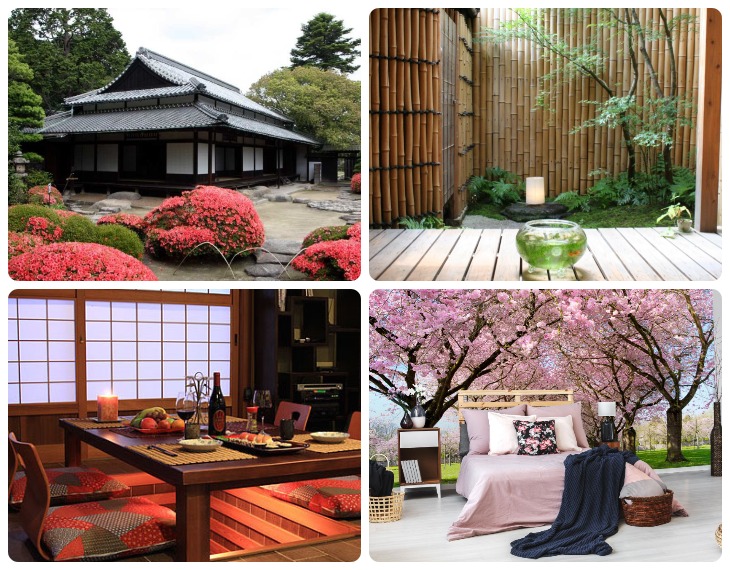 Everything that surrounds Japan and comes to our high-tech world is shrouded in a return to origins, to nature, which naturally attracts people who are tired of megacities and eternal haste. Rural people strive to make their dwellings consistent with progress, and residents of large cities tend to more calm and contemplative interiors a variety of rustic styles, country and, of course, oriental, of which Japanese is the most prominent representative. 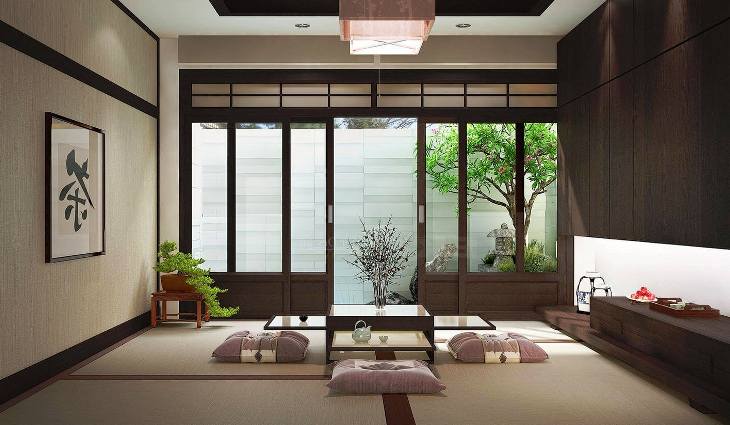 By the way, the Japanese style is most attractive for Feng Shui lovers, since harmony in it is observed in everything and the therapeutic effect of such design is not in doubt it implies fencing housing from the outside world, resting from the hustle and bustle behind a closed door, immersion in loved ones, but at the same time, he leaves a lot of personal space inside the apartment, which, according to the Japanese, is also one of the components of human happiness.

Everything that the Japanese style strives for in the interior is simplicity, comfort and coziness. 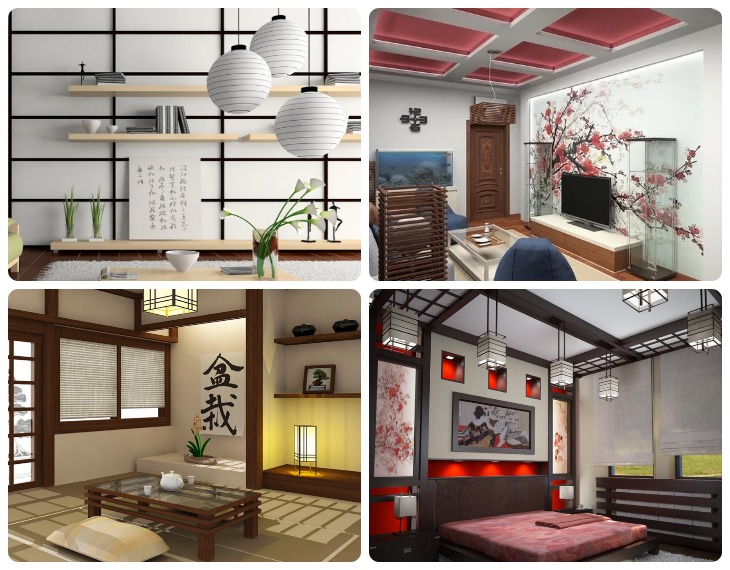 Beautiful combinations of colors, mostly natural (white, milk, cream, beige, red, and the like), nothing artificial, laconic forms, and minimalism in things these are the basic principles of interior decoration in oriental style. But you shouldn’t be limited to natural color materials used for furniture and decoration should be natural. 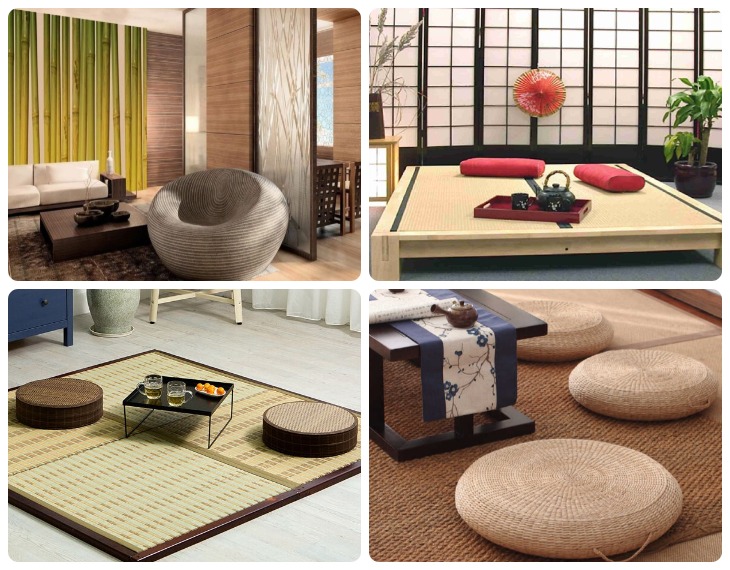 Instead of wallpaper, there is light paint resembling reed or wood, instead of tiles, there is uneven brick or its imitation, instead of a bed, there are straw tatami mats, which are covered at night with a small soft mattress that can be removed from prying eyes in the built-in wardrobes during the day, and are simply a floor covering during the day. 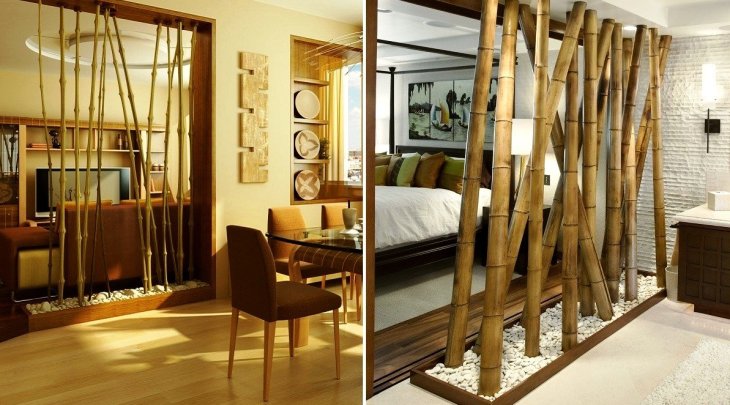 Bamboo, rice paper, decorating windows so that they even somewhat resemble paintings these details also dispose of meditation, a distraction from external worries outside the walls of the apartment.

It is impossible to imagine a Japanese style apartment with a lot of furniture. It should contain exclusively functional things. 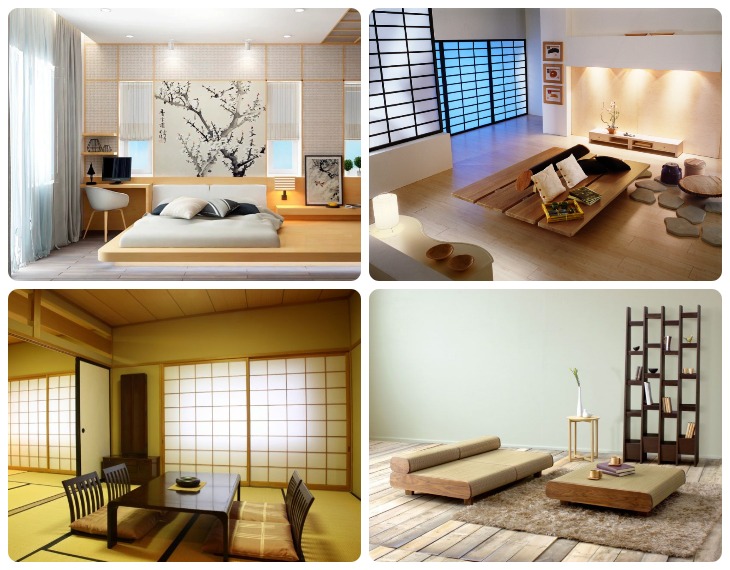 The main rule is nothing more.

From the point of view of a European who has ended up in a real Japanese dwelling, there is practically no furniture in it, and nothing stands out in size or decoration from the general interior. There are no wardrobes, they are replaced by niches built into the walls, which are slightly disguised with figurines and look like they were intended for them. On low tables, you can comfortably sit right on the floor, or on low sofas, if the European mentality takes its toll and a slight elevation is needed for sitting. 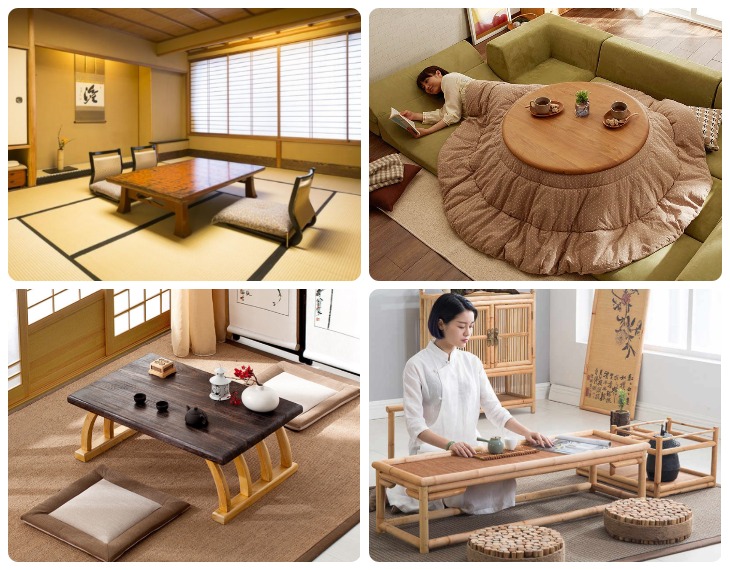 Unused items are hidden in special built-in lockers. Everything that is in sight when the owner does not need it is a violation of the order. No clutter, the less different furniture the better, free space for the Japanese is much more important than the furniture set, which seems to be a sign of prosperity for a European.

The sun, as giving life to everything in nature, is also of great importance in the apartment of any Japanese access to it must be given to every corner. Artificial lighting shouldn’t compete with it. And no blinding lamps – it should be soft, but at the same time not leave dark corners. 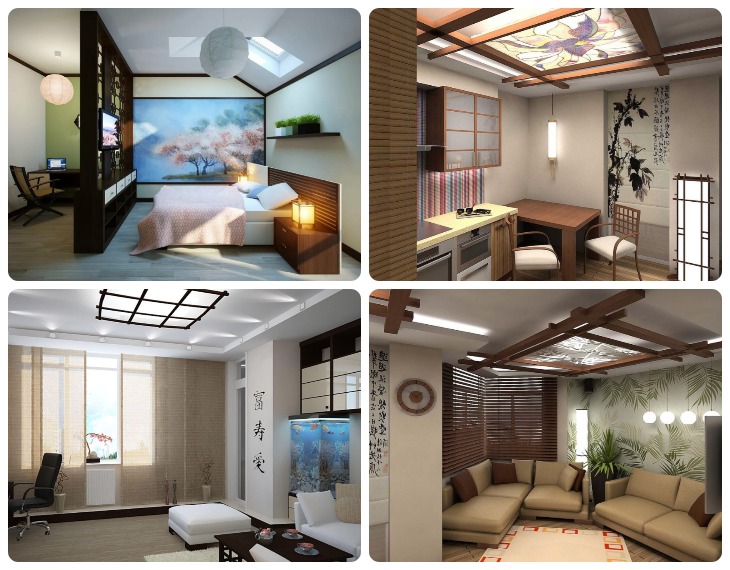 Soft and diffused light coming from simple-shaped lamps is best.

Small accessories that naturally blend into the interior give the room a finished look. National motives, ornaments, small fans with drawings in the form of sakura or pine branches, small boxes, netsuke, dolls dressed in kimonos, bamboo rugs … Even if a thing seems beautiful and interesting only for homeowners, and for them it has some meaning – she should find a place. However, completely thoughtless filling a room with trinkets can kill the impression of the interior. 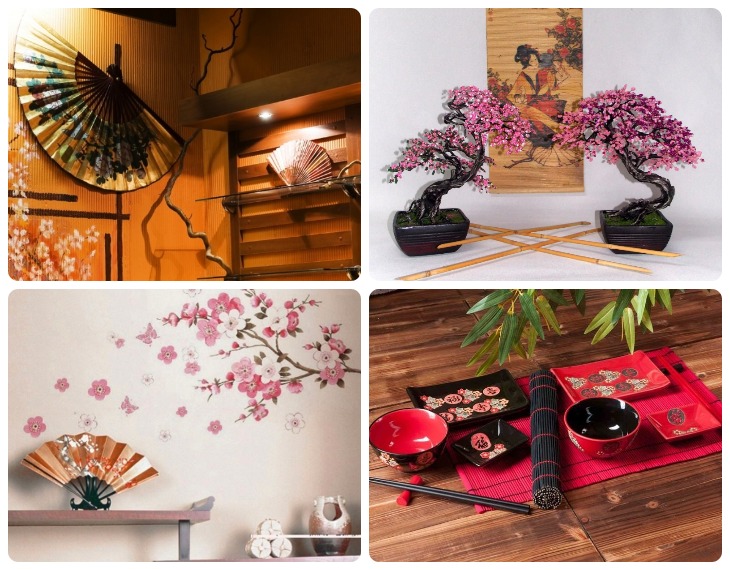 According to the Japanese, there is no place for non-functional items in the house things should be not only elegant and beautiful but also practical. Chopsticks, painted plates will simultaneously become kitchen utensils and decorations. Smells also play a big role in incense sticks, candles, and oils will help to personalize the atmosphere. In any Japanese house, or in a European apartment claiming to be Japanese, the traditional bonsai dwarf tree should also find its place it is considered a symbol of immortality.

Not everyone can appreciate the Japanese style. It is clearly not suitable for lovers of fuss and social events, but for people who love nature and know how to appreciate silence, with this design of an apartment, or a separate room, for example, a bedroom, it will be much more comfortable.